As I write my summary of this election season so far, Donald Trump has just said that his chief advisor on foreign policy issues is himself, President Obama’s nomination for the Supreme Court is being ignored by Senate Republicans, and one Florida precinct in the Tuesday primary election lied to Democratic voters by telling them they could not vote in the primary election and that they had no ballots. Upon inspection, the ballots were found hidden away in a closet.

Does any of the above seem inherently wrong to you? It should.

So, before I’m accused of just being a basher of Republicans, let’s address a basic question posed by this election cycle: What does the rise of Donald Trump say about America today? In my view, it represents the rise of fascism. Fascism is characterized by xenophobia, nativism and a distorted brand of “selective populism” that seeks to destroy democratic institutions in favor of dictatorial action, among other notable characteristics. Am I saying that Trump is Adolf Hitler? No, it’s a different country and a different time; but nobody who speaks like Donald Trump should ever be anywhere close to the Presidency of the United States. That is, if you believe in a democratic republic– and I do.

Granted, the Republican Party is a little worried. But look who’s next in line: Ted Cruz? A lot of Republicans can’t stand him, but he still has a following. This serves to demonstrate how far to the right of center the Republican Party has gone. To some extent, Ted Cruz appeals to the evangelical wing of the RP. This always gets to me. What kind of Christian do you claim to be if you espouse such things as carpet bombing Iraq and Syria? Have contemporary evangelicals read Dietrich Bonhoeffer, a real Christian who stood up to fascism and died a martyr for his anti-xenophobic Christian faith? I don’t think so.

And let’s face it: I really don’t see anyone on the Republican side that cares much about anything that might really help people, e.g. expansion of health care, protection of Social Security, increased public funding for education or the elimination of poverty. They love millionaires, billionaires, unborn babies and they loathe government. In the current Republican universe everyone else can just go to hell.

The Democrats have their problems too. It is not Barack Obama, who has been arguably the most thoughtful and articulate President of my lifetime. As the first African-American President, he should have been treated with a profound sense of respect. Instead, he is treated like shit. He beat Hillary Clinton to win the Democratic nomination in 2008. That should have told the DP something about a Hillary Clinton candidacy, but here she is.

Hillary Clinton has an appeal problem, some of which is deserved, some of which is purely misogynistic. She has everyone beat in terms of actual government experience. She was a Senator and a Secretary of State. She would be the first female President. She has proven leadership skills, and she is obviously well informed, intelligent and knows how to be a deal maker. She doesn’t live in a world where she is only listening to herself. She is not a fascist.

Bernie Sanders represents the expanding Democratic base that cares about addressing income inequality and shares the growing populist resentment to Wall Street. Bernie is defining the terms of the debate and, I believe, the more long-term direction within the Democratic Party itself. But he has a long way to go to actually become the nominee, and I think his prospects are pretty poor. When and if Bernie sees his candidacy as being unable to prevail, he will support a Hillary Clinton candidacy without reservation. Why? Because Bernie knows Washington, too. And he knows Hillary Clinton is not a fascist.

That’s what I think this election is about. It’s about standing up against fascism. All the signs are there, the violent mob atmosphere in the Trump campaign, the corporate media fueling his candidacy, and the growing simple-mindedness of Republican elected officials and many voters within the Republican rank and file. This is what moderate Republicans (what few remain) are worried about too, even if they don’t call it by name. So, whatever your political affiliation may be, this is the decision you are faced with. Voting Republican today is a vote for fascism. Don’t go there. 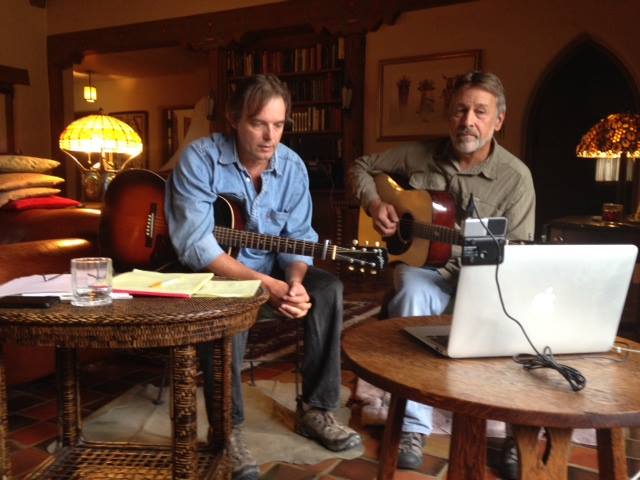 Music Inspired From Southwestern History and The Colorado Plateau

In February of 2016, Chris Brashear, Peter McLaughlin and Todd Phillips will be recording at the historic Colton House at the Museum of Northern Arizona. The Creative Writing Music Residency was conceived by Julie Sullivan, a musician and graphic designer who has contributed extensively to museum publications, as well as serving on the board of the Flagstaff Friends Of Traditional Music (FFOTM); and three musicians – Chris Brashear, Peter McLaughlin and Todd Phillips– who are dedicated to writing and conceptualizing new music that draws inspiration from the Colorado Plateau country. This project has received the generous support of Emeritus museum Director, Dr. Robert Breunig, and current museum Director and CEO, Carrie Heinonen, as well as many staff members at the Museum of Northern Arizona. Look for this CD to be available in the summer of 2016!